The Old Post Office is being converted into another one of Cambridge's historic and architecturally significant libraries.

This is a very exciting addition to downtown Cambridge Ontario, and is slated to open in 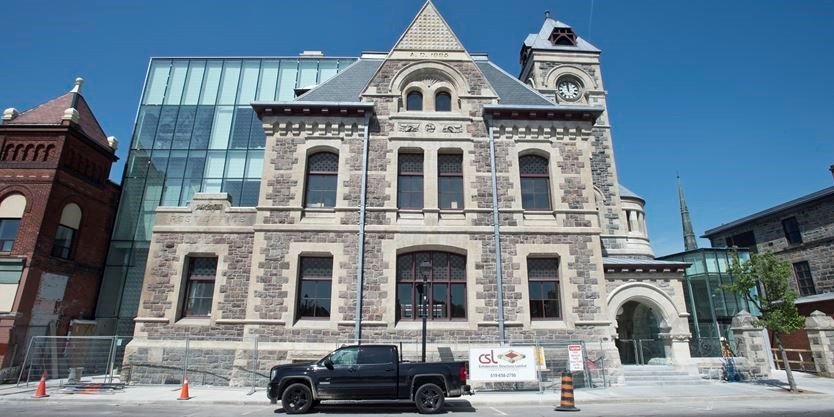 This post office was originally built in 1885, and the original architect was Thomas Fuller, Chief Architect of the Department of Public Works. Fuller designed many of Canada's important public buildings, including the Canadian Parliament Building in Ottawa, and many other post offices throughout the country.

The Old Post Office in Cambridge is a National Historic site.

The post office's west side overlooks the Grand River, both from outdoor patios and  a few indoor glass enclosed rooms at the rooftop level.

Here is a video that show's what's being done inside the building as it is converted into a new library, complete with multiple sections, outside patio, and an cafe.

I'm really looking forward to the completion. I'm sure it will be a great addition to downtown Cambridge Ontario, and just another step in the Renaissance of Downtown Cambridge

What do you think? Do You like what they've done.

The precise opening date for the Cambridge Old Post Office Library has been announced as July 6, 2016.

The library is conducting tours starting on Friday, June 29, 2018.
These will be running for a few weeks. You can get your free tour tickets here.

Additionally, there is a Grand Opening and Old Post Office Party, on Friday evening, July 6, 2018.
More details about the activities and entertainment are on the IdeaExchange website.